Nikitin et al. 2016 just published mtDNA results for nine members of the East European Neolithic Cucuteni-Trypillia Culture. They died around 3500 BC and were buried in the Verteba cave in SouthWestern Ukraine. The results are below...

This dose of mtDNA from Cucunteni-Trypillia is made up entirely of typical Neolithic European farmer lineages. This confirms, like farmers in other parts of Europe, that they weren't simply local forgers who learned how to farm but were instead to a large extent descended of Neolithic farmers from Southeast Europe and the Near East.

As Steppe pastoralists, like Yamnaya, moved westward to Europe around 3000 BC they ran into and (probably)intermarried with the farmers of Eastern Europe, like the Cucunteni-Trypillia farmers. The genes of Eastern European farmers could have therefore been carried alongside Steppe genes to many parts of Europe during the Chalcolithic and Bronze ages.

Not only does it appear Eastern European farmers had a lot of H but one of the Cucunteni-Trypillia farmers belonged to typical modern (Eastern)European mHG H1b. Not a single H1b exists in the about 600 mtDNA samples from Neolithic Germany, Hungary, and Spain. But today every part of Europe has at least 1% H1b. Eastern Europeans; Poles, Lithuanians, Slovaks, Bosnians, etc., have the most H1b(3-4%). Though H1b is mostly European it has also been found in the Near East, Iran, and Western Siberia

Below are the only other instances of H1b in ancient DNA...

The Bronze age H1b individual from Mongolia was of mixed Eastern European and North Asian ancestry, his H1b was from Eastern Europe.

Spain, Past and Present 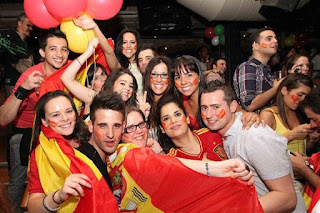 A lot of changes arose in Spanish mtDNA after the Neolithic. mtDNA sequenced from Iron age Spain indicates those changes had occurred by circa 300 BC.

The two mHG which differ in frequency the most are H and K. 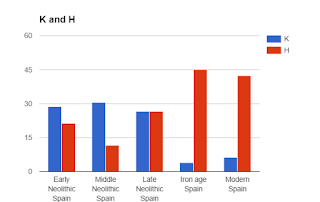 The same mtDNA changes which occurred in Spain after the Neolithic occurred in much of Europe. I think a mixture of migration from “Asia”(inclu. mostly “Eastern Europe”) and natural selection caused(I gave my reasons in this post) those changes to occur. 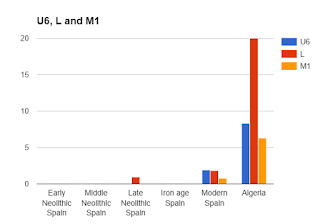 The other mHGs don’t conclusively indicate maternal ancestry from any particular region. U5a, T1a, T2c1, I, R1, W, HV6-24, and H6 are all present in ancient mtDNA from Central and Eastern Europe at high frequencies. It’s possible that region lent Spain those mHGs. But I and T1a are also frequent in the Middle East. 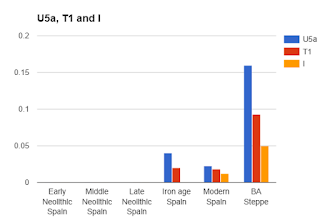 Along with differences there are also noticeable similarities between Neolithic and Modern Spanish mtDNA. Both have a higher frequency of J2b1a, J2a1a, T2a1b, U5b, U5b3, and U5b1i than ancient and modern Europeans from other regions.

Nuclear DNA confirms considerable genetic changes took place in Spain after the Neolithic age. Here’s how modern Spanish come out when they’re modeled as a mixture of Neolithic Spanish and other ancient and modern humans.

So nuclear DNA Spain probably received migration from Eastern Europe(Yamnaya), the Near East(Cypriot), and Africa(Mozabite) after the Neolithic. mtDNA is pretty consistent with this.
Posted by Krefter at 10:18 PM 2 comments: 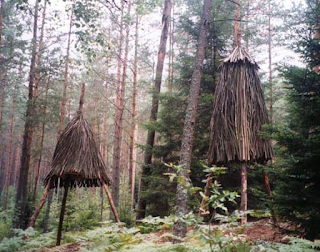 Here's a link to Jones at al. 2017's Figure 1 which displays the mtDNA results of these 8 Stone age Eastern Europeans. I added the new ancient mtDNA to my European Hunter Gatherer and Bronze age Northern European spreadsheets.

Mesolithic Baltic(Sweden, Latvia, Lithuania) HGs can be labeled as WHG or at least very similar. Their mtDNA makeup though is different from Western European WHGs.

Now let's look at who in Europe today has the most and least U5b, U5a, and U4.

I've recently gathered a lot of new European data and will make a post about haplogroup frequencies in Europe soon so stay tuned.
Posted by Krefter at 12:08 AM 1 comment: