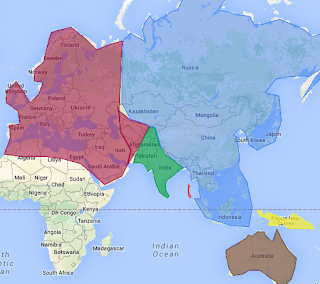 I have added over 2,000 mtDNA samples from Asia and 1,000 from Europe to my mtDNA database in the last few days. Thanks to HaploGrep I've been able to analysis the data more than twice as fast.

With the new data from Asia, I've learned that there are at least Five mtDNA gene pools in Asia. I've also found geographic diversity in East Asian mtDNA and origins of Western mtDNA in Asia.

In the next few weeks I will 1: Research the mtDNA and genome-wide relationship between ancient and modern Siberians, 2: Do more thorough work on European mtDNA with 1,000s of new samples, 3: Collect 1,000s of mtDNA samples from Africa, and 4: Collect many 1,000s of Mito-genomes from Ian Logan which I can now do very quickly thanks to HaploGrep. So, there's a lot to look forward to on this blog if you're interested in mtDNA.

The East Asian mtDNA gene pool is the geographically the largest in the world. Obviously they can't all have the exact same mtDNA. So, I gathered the frequencies of R9 and C subclades in this spreadsheet to find differences: C, R9. East Asia.

There are noticeable differences in subclade frequencies. The biggest is between Siberia and other East Asians. Siberians have a very high frequency of C4a1, C4a2'3'4, and C5 and all three are near non-existent in other East Asians. Tibet/Nepal also have a decent amount of those C subclades, probably because they live near Siberia.

There's also regional-trends in the frequencies of R9 subclades. The most popular R9 subclade in NorthEast and SouthEast Asia is F1a, in Siberia F1b, and in Tibet/Nepal F1c1a. As with C, Tibet/Nepal have a connection with Siberia because of a high frequency of F1b. There's also a high frequency of F4b, R9c1, and F3b in Taiwan and R9b1a in Burma, which are near non existent in other East Asians.

All other East Asian haplogroups can't easily find haplogroups with low-coverage testing, like H in West Eurasia. So, it was hard to find differences in subclade frequencies in other haplogroups, but I did find some. I wrote those differences down here: Regional Asian mtDNA

NorthEast Asians(Japan, Korea, China) are fairly similar. Tawian and Siberia are differnt from NorthEast Asia in many ways. There are Palaeilthic-splits in mtDNA and more recent links that they have with NorthEast Asia. Nepal and Tibet have a significant amount of South Asian mtDNA, connections with Siberia, and their own unique bottle-neck lineages. Despite Tibet being in the country of China, it's important to remember they aren't Chinese at all, they were just conquered by Chinese.

Origins of Western mtDNA in Siberia and South Asia

Siberian's Western mtDNA specifically looks like it comes from Pre-Historic Russia(U4, U5a, U2e, T1a, J1b1a1). They probably have a mixture of Mesolithic Russian and Bronze age Andronovo mtDNA(J1b1a1, T1a, J1c, I, H2a1, H6). The composite of Siberian Western mtDNA, is very similar to Catacomb and Andronovo, especially because of their strangely high frequencies of U4.

South Asian Western mtDNA is dominated by U2(xU2e) and U7. The U2(xU2e) subclades are rarely found outside of South Asia, so have probably been in South Asia for 10,000s of years and not recent arrivals from West Eurasia. The sources of South Asia's U2 is likely a population closely related to Paleolithic North Eurasians, like Ma'lta boy and Kostinki man. The high amount of U7, like in some Siberians, is very strange. U7 is popular in neighbors of South Asia, like Iranians, but it isn't nearly as popular compared to other Western lineages as U7 is in South Asia. Maybe South Asia's U7 and U2 are from the same source.