I just analysed over 600 mtDNA genomes of four populations from Southern Africa; Khoisans, Angolans, Zambians, and Pygmies. I have studied mtDNA from most parts of Eurasia but had never studied African mtDNA before.

The image below explains well how African(inclu. Southern African) mtDNA is related to Eurasian mtDNA. 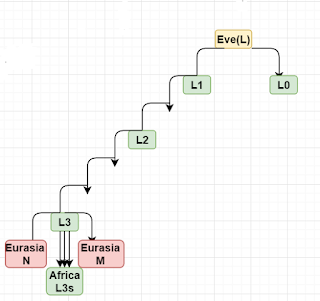 The mtDNA of Southern African populations is structured similarly to the mtDNA in Eurasian populations. What I mean by this is; both mostly belong to a small number of Macro-mHGs not a large number of Micro-mHGs.

Below is a link with mtDNA trees displaying the Macro-mHGs. All haplogroups I labelled are Macro-mHGs. These trees visually present the age-dictated layering of Macro-mHGs and the relationship between different Macro-mHGs.

Trees of Southern African Macro-mHGs. Macro-mHGs are colored according to the clusters they belong to which I describe in the next section.

Despite the fact all four of the Southern African populations I analysed live relatively near each other there is considerable mtDNA diversity among them. Don’t get me wrong, there’s also lots of uniformity. I classified four Macro-mHG clusters and discovered almost 200 new subclades.

The Pygmy are the only group who makes up a cluster all on their own. Three Macro-mHGs take up about 50% of their mtDNA. I’ve seen a few Macro-mHGs dominate small closed-off populations in Eurasia(eg, Saami, Kalash, Basque), so my guess is that Pygmy are a similarly small closed-off population. As I’ve learned from Eurasia, small isolated population’s share little mtDNA and Y DNA with their neighbors but are still closely related to their neighbors. So Pygmy are probably very related to other Southern Africans.

As I said above I discovered almost 200 new subclades. This spreadsheet posses an analysis I did on those about 200 subclades: New Subclades of Southern Africa.