Were Bronze age Central Europeans the product of unions between Foreign Pastoral Men from the Eurasian Steppe and Native Farmer Women from Central/Eastern Europe? One study (Goldberg et al. 2016) says they were and the other says they weren't.

But each used different methods to do so. Goldberg et al. 2016 used ADMIXTURE and the other used qpAdm. In my opinion qpAdm is a better method than ADMIXTURE. So although I'm undecided, if I had to guess I'd guess that Lazardis and Reich are correct.

Let's look at the mtDNA of Bronze age Central Europeans to see if there's any evidence of sex bias admixture.

Keep in mind I counted originally hunter gatherer "WHG" mHG U5b as farmer. mtDNA data doesn't suggest admixture between Steppe Pastrolites and Native Central/East European farmers was sex bias except maybe in Corded Ware. At least 40% of Corded Ware mtDNA is of farmer origin but only 25% of their ancestry is.

mtDNA from modern Europeans in my opinion though does indicate sex bias admixture has occurred in European history. Specifically it indicates most of modern European mtDNA is "EEF" and "CHG", from the Neolithic Near East.

Is my mtDNA Farmer or Steppe?: If you want to know your mtDNA is of Eurasian Steppe Pastrolite or European Farmer origin email me your haplogroup to sammyisaac107@gmail.com. Most European mtDNA can be labelled as Steppe or Farmer. For example I know my mtDNA (U5b2a2) is from European hunter gatherers who were assimilated by farmers and my Y DNA (R1b) is of Steppe origin.
Posted by Krefter at 2:41 PM 4 comments:

Siberia, Past and Present 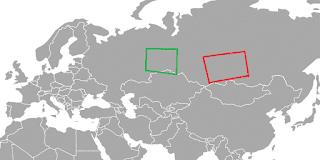 
A decent amount of mtDNA from Siberia which dates between 6000 BC to 0 AD has been sequenced in the last 15 years or so. In this post I'll give a brief description of the similarities and differences between ancient and modern Siberians.

Below is a list of the ancient and modern Siberians which I'll compare to each other.

Here's a link of mHG frequencies for the above populations; Siberia, Past and Present.

All of the primary East Asian mHGs; A, B, C, D, F, are represented in ancient Siberia except for B.

South Siberia, Past and Present

mHG G2a makes a significant mark on all the mtDNA in all of the ancient and modern South Siberians. In contrast modern and ancient West Siberians barely have any G2a. But G2a can be found at decent frequencies in parts of Eastern Asia.

Both B and M7 are frequent in Eastern Asia(Japan, China, Burma, Tawian, etc).

West Siberia, Past and Present

Like in South Siberia, in West Siberia mHG A frequencies are considerable lower in moderns than in ancients. The Ust Tartas and Odinivo Cultures' high frequency of Z(19%) differentiates it from all other ancient and modern Siberians. 0% of modern West Siberians have Z.

West Eurasian mtDNA is present in every ancient and modern Siberian population. Ancient Siberians' WE mtDNA belonged exclusively to mHG U(U5a, U4, U2e) until the appearance of the Afanasievo(3000 BC)  and Andronovo cultures(1800 BC) from Eastern Europe. They brought with them large amounts of H, U5a, U4, T2, T1a, and smaller amounts of other West Eurasian mHGs.

Up until 1000 BC all of the WE mtDNA found in Siberia looks like it's from Eastern Europe. In 1000 BC mHGs never found in Europe but frequent in Western and SC Asia appear; U1a, U7, J1b, and others. Possibly after migrations from Eastern Europe(eg, Afanasievo) peoples from SC Asia or the Caucasus migrated into Siberia.

First mtDNA from Mesolithic Sardinia; J2b1 and I3

Modi, A. et al. 2017 just published mito genomes of two 10,000 year old Mesolithic individuals from Sardinia. One belongs to J2b1 and one to I3. Neither belongs to hg U, the lineage which 97% of 100+ other Mesolithic European mtDNA samples belong to.

A J2 and a hg I dating around 10,000 years old have been found in the Near East. Their presence in Mesolithic Sardinia indicate Mesolithic Europe, maybe specifically Mediterranean Europe, exchanged genes with the Near East before Near Eastern farmers migrated en masse into Europe in the Neolithic.
Posted by Krefter at 12:49 AM No comments: 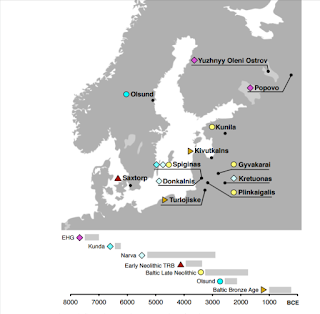 The news results contain only a few pieces of interesting information.


Regarding the Baltic hunter gatherer H11a and K1b2, both mHGs today are more or less European specific today. H11a peaks in Poles, not in a particular large region, which is interesting. Also K1b2 is well documented in Europe but to my knowledge only one non European(Armenia) is known to carry it.

The new data suggests Baltic mHG frequencies changed in a big way after the Late Neolithic. Can you guess how? If you read my blog you should know. This will help you; Natural Selection Did It!. mHG H frequencies skyrocketed. I’ve been speculating for a while that for some reason in Bronze age Europe natural selection drove mHG H frequencies upand the frequencies of other mHGs like T2 and K down. mtDNA data from Iron age Poland, Scandinavia, and Spain also display high frequencies of H unlike earlier people from the same locations. My natural selection hypothesis is looking stronger and stronger.

Lastly not a single individual in these two studies belonged to an Siberian mtDNA haplogroup. As far as I know  the autosomal DNA from these ancient individuals don't suggest they had any Siberian-like ancestry either. So it looks like Siberian ancestry, possibly along with yHG N1c and Uralic languages, arrived in the Baltic during the Bronze age or later. Siberian mtDNA(C5b1, Z, D) dating 3,500 years old was found in Karelia. So maybe Siberian ancestry existed in some parts of NorthEastern Europe during the Bronze age and then it gradually expanded.
Posted by Krefter at 1:26 AM 5 comments: