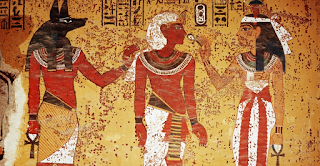 Like their genome-wide affinity the ancient Egyptian’s mtDNA is distinctively Near Eastern. Not just Middle Eastern but Near Eastern. Recall earlier this year I pointed out that modern Egyptian mtDNA shows affinity to the Near East not NorthWest Africa. They share most mtDNA first with modern Egyptians but then also Arabians and peoples in the Levant(Syria, Lebanon, etc). A mere 1%(1 sample) belonged to Sub Saharan African mHG L(xM, N). Modern Egypt though has a frequency of 20% frequency!

Every single one of those mHGs is specific to the Near East-North Africa except for U6a and M1a which make a significant presence Iberia and many parts of Africa.

Today R0a, HV1, and J2a2 interesting all peak in Egypt. And the ancient Egyptians had as high of a frequency in those mHGs as you’ll find in any modern population. Their high frequency of J2a2(6.7%) is even more interesting considering it has been found in the Natufians. J2a2 seldom appears outside of the SouthWest Asia-North Africa. Last year I classified it Near Easter(See here). J in Europe is dominated by J1c while J1b-J1d dominates J in much of the Middle East.

R0a has a more international distribution than J2a2 and HV1. Like J2a2 it peaks in the Near East but it also surprisingly has a strong presence as far east as India. Several examples R0a have been found in Neolithic and Bronze age Jordan.

Here’s the most important differences between ancient Egyptian mtDNA and modern Egyptian+Near Eastern mtDNA: moderns have a lot more J1b, H, U3, and African L(xM, N).